The thing about ConSewVing, is that with all the free resources, it is so hard to find a starting place. Well, Ms. Spool Teacher got bored (was waiting for the InSewVation to kick in for what next to do to the red gingham yoga dress since she had gotten to a stumped place).. So, she started doing some more organizing in her sewing room. She still needs to get her sisters things out from the front rooms (SeestaPoopsie had been there for several months and they had made space for her; but she is now on to bigger and better things, although much of her stuff is still at Ms. SpoolTeacher’s house and she needs the room for her dream of a “Broader Concept Manufacturing Facility”) (Seesta’s have had two packing meets that ended up in popcorn and a movie!) She also has several big boxes of “resources” out in the garage so decided to bring them in and consolidate them into the heaps of things to eventually be used for the ConSewVation of the world. Well, it wasn’t long before a piece of fabric reached her hands that was InSewVating enough to halt her in her tracks, leave all the messes as is and start a whole new mess… 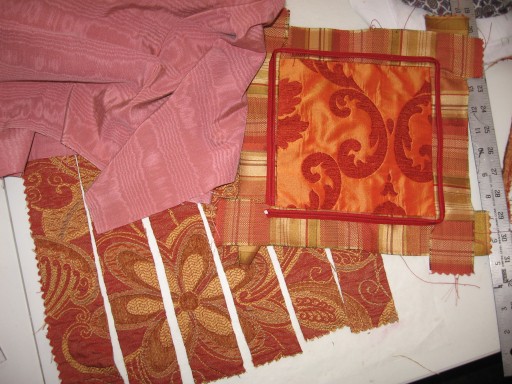 As it is with InSewVation, you get a burst and forget to take pics. The orange and rust designer damask center fabric is what got her started. One of her fabric reps had donated a sample book of exclusive damask patterns good for use with drapery, bedding, upholstery. While she had Lollipop & Polka Dots Variety Store, she had had the fabric book out as a feature display; but when anyone learned of the $65 p/yard price, there was a fainting sigh. So, Ms. SpoolTeacher decided she would relegate the book to her resoures pile and attend to it later. After cutting off the label and getting it cut out of the book, she was left with a nice square piece. As it is with all of her InSewVation pieces, she just uses her intuition to grab this and that and compile a composition, improvising the construcSewn as she goes. 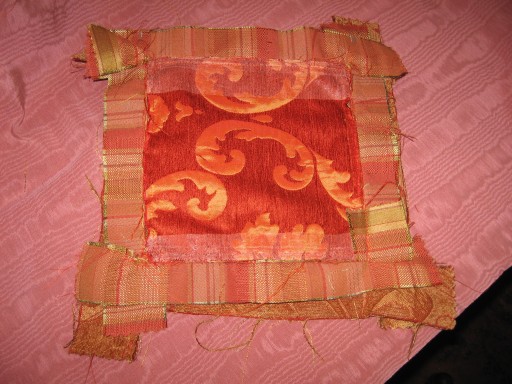 The view from the back, not so nice looking 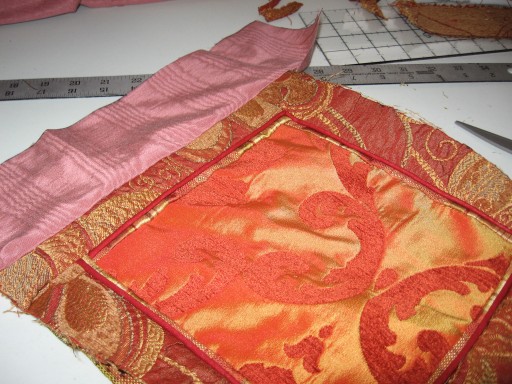 After piecing the “scraps” together, and adding the final “framing” fabric (which will be the outside edges of the front and the back) she then decides to embellish the perimeter with velvet ribbon…she is getting very pleased with the outcome… 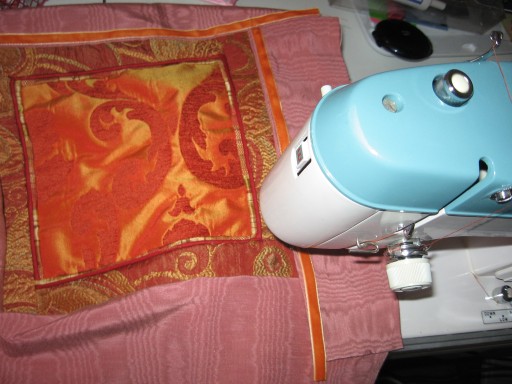 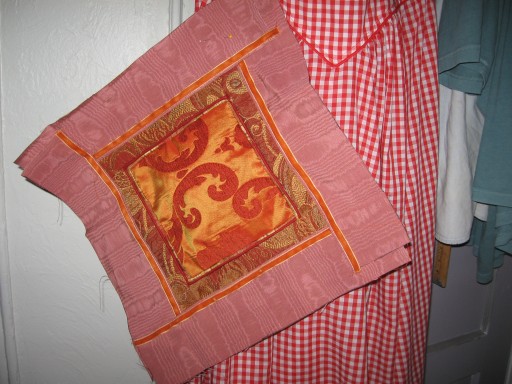 She’s so happy, she pins it to hang and stands back to admire…

And then, she takes it back to the work table and starts straightening it out so she can square it off and add a back…and ooooops! a fabric frays…:o( As is often the case, things don’t work out. It was starting to looks very nice, so she wasn’t ready to give up…but, she did pull (nicely seam ripped the threads to free it up) the compromised pieces out to investigate a remedy… 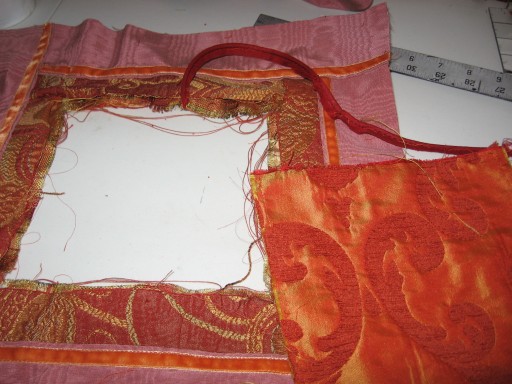 So much for that idea, now what…hmmm! 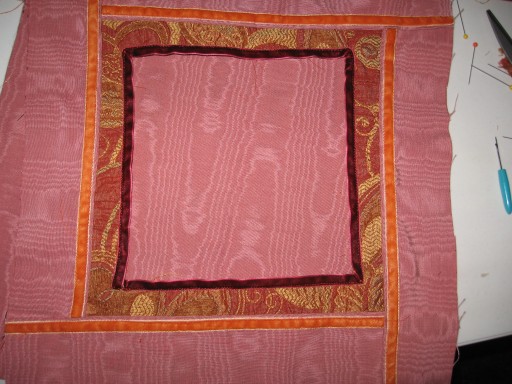 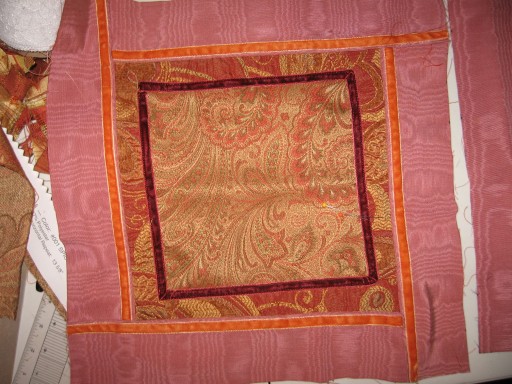 Paisley center, more to be done, on to InSewVation Fabric..

Bored with this, she moved on to the original InSewVation fabric piece… 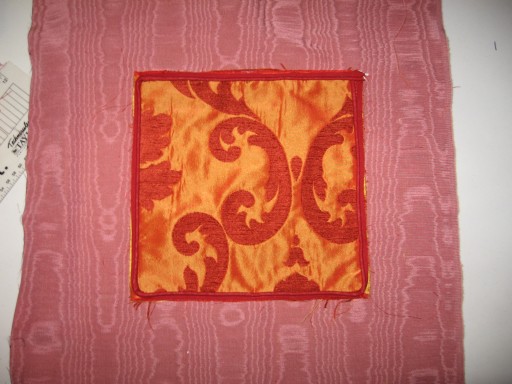 A New Beginning, sometimes it works out better

And she thought she had perfectly centered the fabrics, but after fully securing the pieces and piping, they were not! And she was not going to pull it all apart again. As it turned out, it didn’t matter. 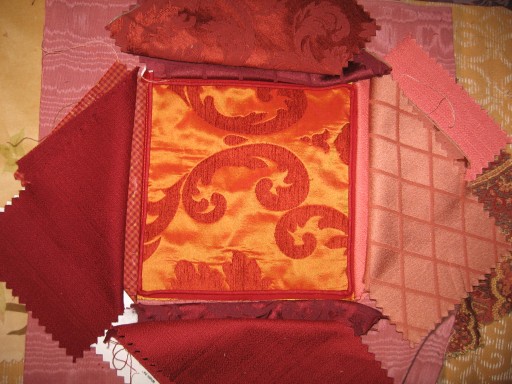 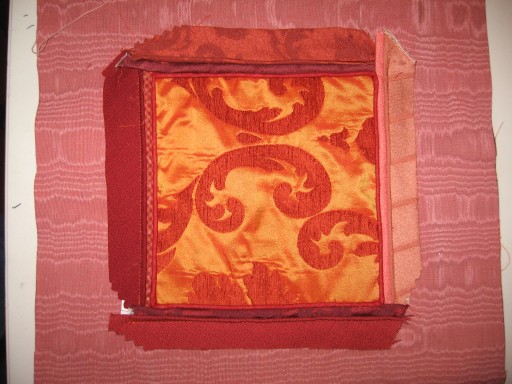 These were all little pieces clipped out of fabric sample books and since they weren’t long enough to use otherwise, she put them on the bias and worked around the glued tops and labeled bottoms and stretched the bias to meet the length she needed. This did leave some anticipation worry as to whether it would not buckle in the finished product..But after cutting the pieces in a stacked fashion (layered; closest to seam clipped close, next one less, and so on…so the layers weren’t thickly laying on top of each other) 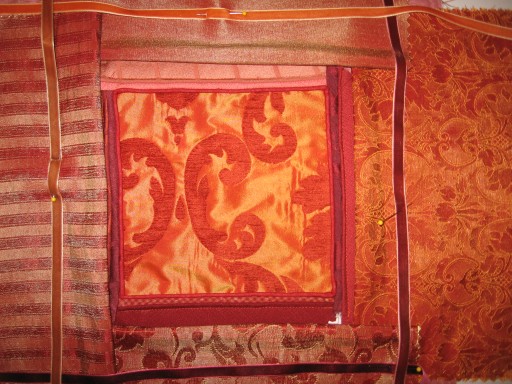 Ms. SpoolTeacher started intuiting the next stage…she liked this, but not enough. Hmmm… 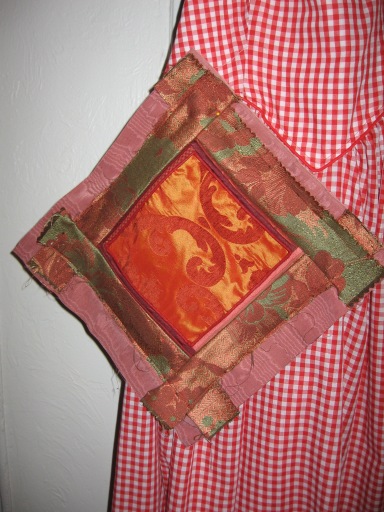 So into it, she forgot to take pictures of the layout

Oops, she got so involved in just doing it, she forgot to take the pictures of it in progress, but now she was happy. 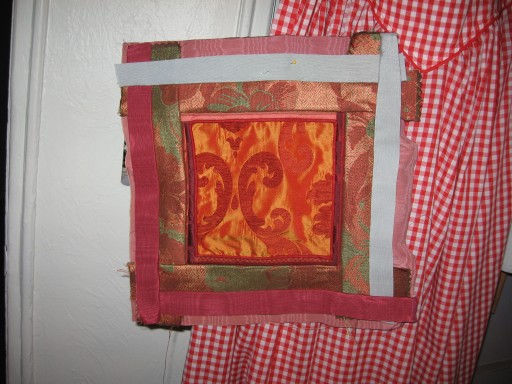 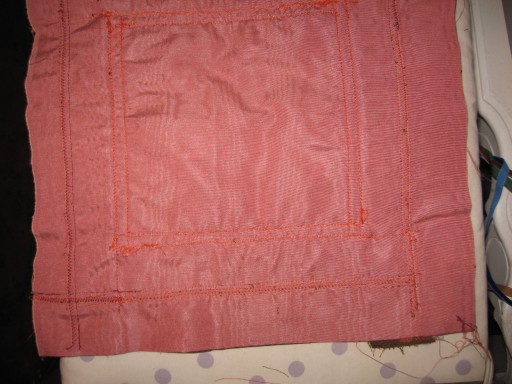 The back looks much better than before, techniques progressing

The back is much more ordered and clean than the first attempt. She is self-spooling. (Teachers never stop learning, they just try to get a little ahead of their students so they can be of help) 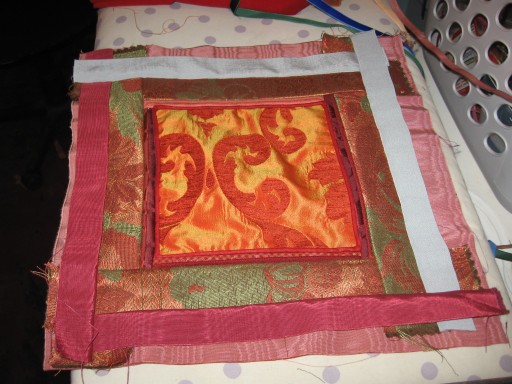 She decides it doesn’t need any velvet embellishment, it stands on it’s own just the way it is. 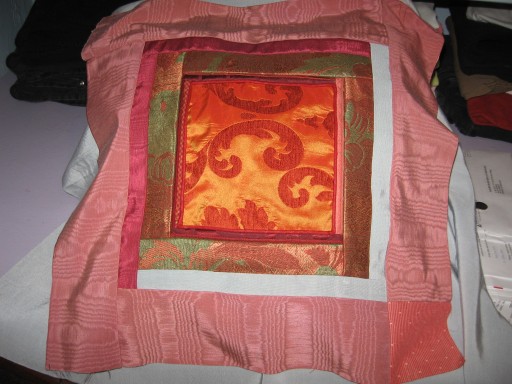 As she was going along adding the final frame, she realized she had clipped the first strip before she realized she would need that corner to lap the forth piece over…she would worry about that when she got there…(so much for “measure twice, cut once”! This tends to be a signature of hers, to leave some kind of hint of imperfection, It’s probably subliminal…don’t ya s’pose? Notice the corner piece spliced in, (she could have just left it the pink moire but then the lap overs would have been wrong, she liked this wrong better anyway). 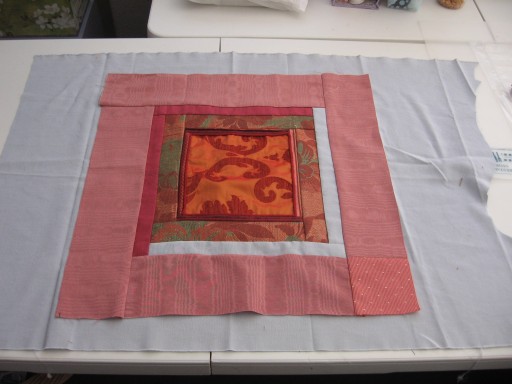 A view in the good morning light 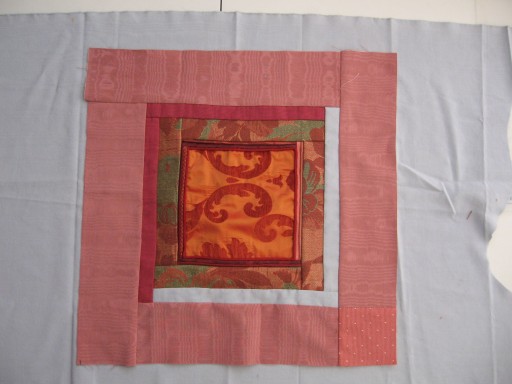 a view from above 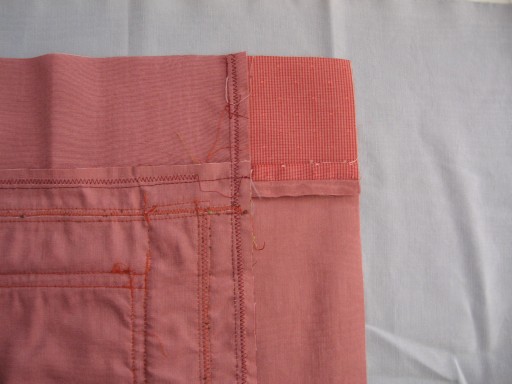 detail of the spliced piece

All the zig-zags were so the fabrics under wouldn’t fray…(you know that problem from the beginning….) 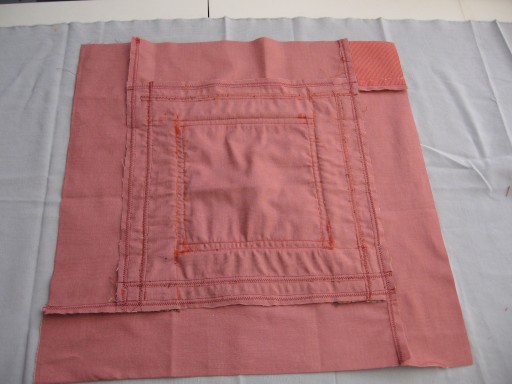 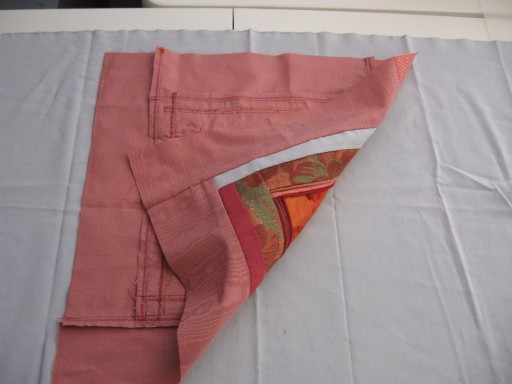 And that is it so far. Ms. SpoolTeacher has to do some sewing for a client today and is busy getting ready for the big job hunt tomorrow, so she will come back to post the final phase of the Scrappy Designer Pillow. It is part of the big job hunt, so she will be working on it and taking pictures today. She’s trying to make a job for herself…cross your fingers. CrissCross 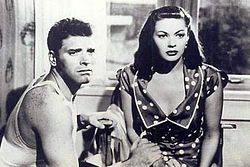 (to read part 2 of Scrappy Designer Pillow, click this link)…

Ms. SpoolTeacher is a Designer by career profession, a seamstress by passion, a teacher by osmosis. She's very intent on getting off the grid and loves to participate in anything that uses resources that already exist. She is aka Ms. Jackie of all Trades. She can be found expounding around at any of a number of places, click the vintage pattern Gravatar image to see where Ms. SpoolTeacher expounds around.
View all posts by Ms. SpoolTeacher →
This entry was posted in Lollipops, Spooling Around, Uncategorized. Bookmark the permalink.